The Pantheon was believed to be built by Marcus Agrippa between 25-27 BC based on the inscription at the front of the façade that says “M.AGRIPPA.L.F.COS.TERTIVM.FECIT” which means “Marco Agrippa, son of Lucio, consulate for the third time, built”.  Further excavation and study, however, has found evidence that the current Pantheon is not the original. Read on for more history of Pantheon.

After Marcus Agrippa, the statesman and an architect, had helped Augustus to be the first Roman emperor, he was commissioned to launch large scale building programs in Rome, the Pantheon is part of a complex.

It is believed that the current Pantheon was built during Hadrian’s time between 118-125 AD.  As the inscription on the pediment still said that it was built by Agrippa, it was only when the excavations in early 19th century found that lots of bricks were marked with dates during Emperor Hadrian’s time did people realized that the Pantheon is much older than that. 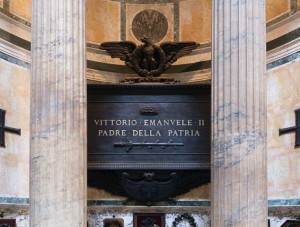 During Renaissance, it was popular for famous artists and architect to be buried here.  Two kings of Italy, Vittorio Emanuele II and Umberto I with his Queen Margherita were buried in the Pantheon too.

Today, the Pantheon still runs as a Christian church (since 609).  This has greatly helped to maintain and restore this great Roman architecture.